In September 2017, Angela’s mother was diagnosed with lung cancer. She had already lost her father to cancer, so it was difficult having to see another family member go through the same illness. She moved herself and her two boys into her home, so she could be her full-time carer.

“On the weekends after chemo, mum would always be quite ill. On her final round of chemo she came home and, again, was very ill but it was nothing unusual. It got to Sunday and she was really wasn’t well, so I took her temperature and phoned the chemo ward just to make sure everything was okay. The hospital told us to see the doctor the next day, which we did, and it was the doctor who phoned an ambulance straight away, as he was worried she had sepsis.

Half an hour after leaving, the hospital called to say she’d taken a turn for the worse and had fallen into a coma. When we arrived back, they took us into a family room and explained that if she was to wake up, which was unlikely, she’d spend the rest of her life in a wheelchair with a tube permanently in her throat. Mum was ex-police and strong-minded, and so we just knew it was a life she would hate. We had to make the hardest decision of our lives to turn off her oxygen and wait for her to die.

Mum had written a will but hadn’t signed it, and there were no instructions as to what she wanted us to do. The bereavement and donations team came to see us to talk about organ donation, and it was the hardest thing to make a decision on – I went to bed thinking ‘My mum had just died and I need to make a decision about her organs, but I don’t know what she wants.’ I just didn’t know what to do!”

Going home was incredibly overwhelming. I wasn’t working as I had been my mum’s full-time carer, but I had two young boys to look after. Mum had helped financially, so losing her was losing an income – I remember thinking, ‘How am I going to do this, I have no money!’ I wanted to give her a proper funeral but I just couldn’t afford to pay for it. I put a post on an online veteran police officer page, and someone commented suggesting I contact my local Freemasons. My dad was a Freemason, so I got in touch with an Almoner who supported me in contacting the MCF. “I had managed to get a government grant to cover half of the cost of the funeral and after hearing my situation, the MCF agreed to pay the difference. The funeral was still very simple; I bought flowers from my local supermarket and made all the food myself; we chose a basic coffin and the local social club lent me their hall for free. But I was so happy I could do this last thing for my mum – the MCF supporting me took the pressure off and I stopped worrying about how I was going to afford it, which allowed me to focus on making it a nice day for everyone.

Although the MCF supported me with funeral costs, I still didn’t know how I was going to cope day-to-day. I was receiving benefits which helped, but things that made the everyday that bit nicer were forgotten about as I couldn’t afford them. My Almoner said that given my financial situation, the MCF may be able to help me further with costs to cover my daily living expenses.

Sure enough, they came through and said “Yes, we can help and here are people you can talk to if you need emotional support.” It was the light at the end of a very dark, and long tunnel and in all honesty, it saved me.

The support has allowed me to do things with the boys that I couldn’t have done previously. If I wanted to do something as a family, I would have struggled and saved all I could – the grants I receive have removed the pressure and I feel as though I can actually provide for my children.

My son, Kian, came home from school one day and said that there was a Belgium trip that he wanted to go on. My older son Josh had been on the same trip, but this was something my mum paid for. Because of the support, I was able to give him the same opportunity as his brother, which was a trip he’s never forgotten.”

It was amazing, the MCF has just been amazing. I can breathe again. I cannot imagine where I’d be without the support, and the fact that Freemasonry doesn’t forget about you, even after your dad passes away, is something I’ll never take for granted. The support has totally changed, and saved, my life. When Margaret developed a problem with her wrist, she found herself facing huge NHS waiting lists, so… 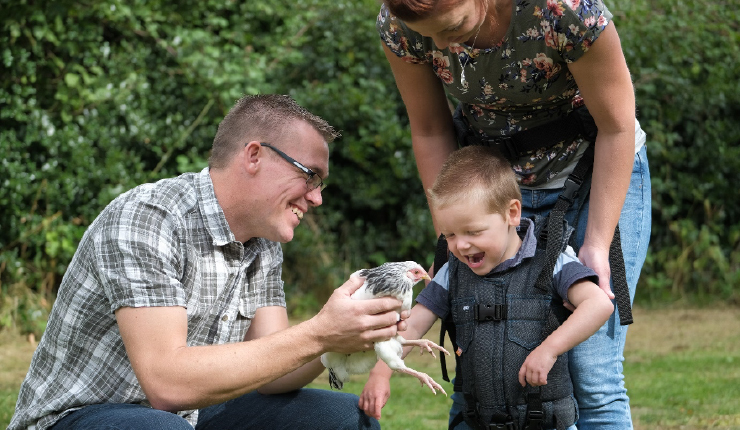 Sally lives in Wiltshire with her two-year-old twins, Ted and Alex, and partner, Neil.